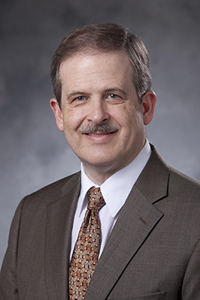 James T. Dobbins III, PhD received a BS in Physics from UNC-Chapel Hill in 1978 and MS and PhD in Physics from the University of Wisconsin-Madison in 1983 and 1985, respectively. He did his graduate study in the area of advanced digital imaging in medicine. His entire career has been at Duke University, where he is Professor of Radiology, Biomedical Engineering, and Physics and Founding Director Emeritus of the Medical Physics Graduate Program. He has also spent seven years in senior administration at Duke, having served as Associate Vice Provost and now Strategic Advisor to the Provost.

His research interests are in the area of advanced digital imaging and the science of image quality metrology. He is an internationally recognized scholar in advanced x-ray imaging, having developed several techniques that have been put into clinical practice in hundreds of hospitals and clinics worldwide. He has over 330 publications and presentations and twice won awards for best manuscript of the year in a scientific journal, including the Sylvia Sorkin Greenfield Award from AAPM in 1996.

In addition to his three decades of research experience, he has extensive involvement in education and leadership, including 10 years as founding Director of the Medical Physics Graduate Program at Duke. He is also co-founder, past-President, and former Chair of the Board of Directors of the Society of Directors of Academic Medical Physics Programs, Inc. He has held numerous leadership roles in national scientific and professional organizations, including having served as Chair of the Education Council of AAPM (2016-19) and President of AAPM (2021).

In his role in senior administration at Duke, he was part of a small team that designed, built, and launched a new joint-venture university in China – Duke Kunshan University (DKU). His roles included responsibility for the academic and programmatic aspects of the new university at both the graduate and undergraduate levels, including recruiting and hiring recommendations for the entire natural sciences faculty. He also served as Secretary of the Duke Kunshan University Board of Trustees, and coordinated the approval process for 3 new graduate programs at DKU, including a Masters program in Medical Physics.

Dobbins is a Fellow of AAPM and SPIE, and is honored to serve our field, our association, and our members as Chair of the AAPM Board of Directors in 2022.